"Frenulum:
The membrane attaching the foreskin to the glans and shaft of the penis (at the ventral midline, just proximal to the meatus). It is richly endowed with nerves. Often only a remnant of the frenulum is left after circumcision, if it is not also removed. Many circumcised men consider it their "G-spot" - but only because their "G-area", the ridged band and frenular delta, has been removed. (L. fraenulum = little bridle pl. frenula) There are also frenula under the tongue and elsewhere." http://www.circumstitions.com/Glossary.html#frenulum

The left side panel shows an intact (uncircumcised) penis with the foreskin retracted. The right side shows a circumcised penis (no foreskin).

The penile frenulum is a band of tissue that attaches the foreskin to the bottom of the glans. One of its functions is to hold the foreskin over the glans when the penis is not aroused. Besides, nerves and veins go through the frenulum. Most men who have their frenulum (or part of it) consider it to be one of the sensitive (and pleasurable) areas of the penis. Yet for some reason, some doctors completely remove it during circumcision, depriving those men from the sensation in that area. And most of the circumcisions cause at least some damage to the frenulum anyway.

Notice in the intact (or uncircumcised) penis (left panel) how the frenulum starts around the meatus and expands as it opens into the ridged band, the mucocutaneal transition area at the tip of the foreskin.

Most circumcision procedures cut and then reattach the frenulum. Some specifically cut the whole tissue. Of many videos I have watched, I've seen a single procedure that took care to cut around the frenulum leaving it relatively unharmed, but this was in a person under general anesthesia, not in a baby with a clamp.

Notice in the circumcised penis how the remnant of the frenulum attaches at the bottom of the frenular delta, disfigured. Notice also the skin tags on both sides, two little round things on the left side (on the screen) and a larger one on the right. This, and the irregularity of the scar (the line that separates the skin of the shaft from what's left of the inner foreskin, which here is the tissue between the glans and the shaft) are cosmetic defects of the procedure.

Cutting the frenulum or the frenular artery has the potential to reduce the blood flow to the meatus (ischemia) and may result in meatal stenosis (development of scar tissue reducing the size of the meatus) which can have an impact in the ability to urinate, may cause infections and may require surgery in order to repair. 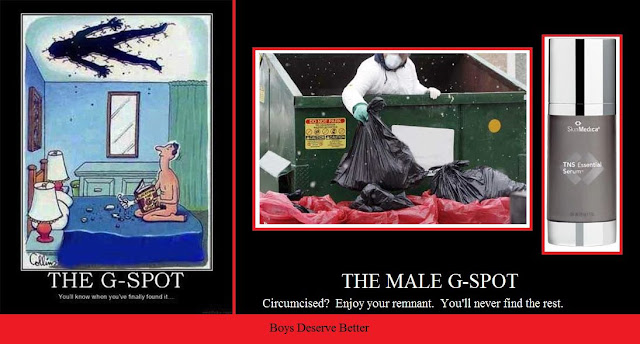 dreamer
I like photography and arts in general. From time to time I paint or draw and write. Sometimes I practice taichi. Every thing has its moment. I like to take the sun in the shadow au naturel. I like the sea. There's no better beach than a nude beach. I like to get rid of taboos, challenge myself to step beyond the comfort area and destroy the concept of normality. I'm light and shadow, fire and water. I'm another manifestation of the 4 elements and the perpetual flow of the universe.